If you need another reason to act – think methane hydrates 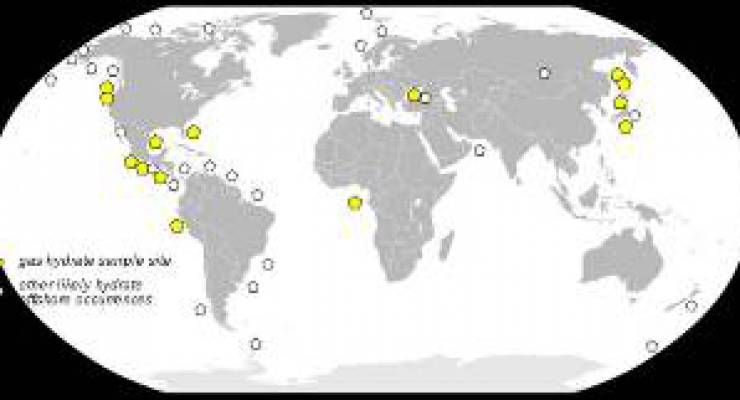 If you read Frank Schätzing’s „Der Schwarm“ you will have an idea about the potential catastrophic effects of the melting of methane hydrates. So what are methane hydrates and why is their melting so worrisome?

Methane hydrates are compounds that trap large amounts of methane inside the crystal structure of frozen water. These compounds are commonly found in shallow areas of the ocean within the sediments as well as right on the ocean floor all over the world’s continental shelves  (see figure above). They are stable at 0°C, but under pressure (such as underneath the ocean surface) they can be stable at higher temperatures. Methane hydrates used to be stable at a depth of about 100 to 400 m, in a zone called „gas hydrate stability zone“. However, this stability zone is shifting downwards as ocean temperatures are increasing from anthropogenic global warming. Consequently, methane hydrates that are deposited at relatively low water depths start to become unstable.

A recent article in Geophysical Research Letters by Westbrook et al. describes this worrisome behavior: more than 250 gas bubbles, predominantly containing methane, have emanated from the seabed of the West Spitzbergen continental margin, from depths between 150 to 400 m.

As water temperatures increase, methane hydrates become unstable and break down into water and methane. The methane gas then bubbles up towards the surface of the ocean.  Currently, the bubble dissolves before it reaches the air, thus not yet directly contributing to an addition of greenhouse gases to the atmosphere. However, the dissolving of methane in water further decreases its acidity which can severely affect ocean life (see previous article).

If the bubble would reach the ocean surface, then it would release methane into the atmosphere. Because methane is a greenhouse gas 20 times more potent than carbon dioxide, the release of vast amounts of methane can significantly contribute to the acceleration of global warming. Methane has a relatively short half-life in the atmosphere of seven years (compared to several 100 or even 1000 years for CO2). However, methane is oxidized to CO2 and water, thus further contributing to global warming even after it is broken down. A release of methane from methane hydrates is therefore, like the release of methane from permafrost, a very serious threat to our current global climate. In fact, sudden releases of large amounts of methane are associated with significant changes in the earth’s climate at former periods, such as the Permian-Triassic extinction.

As described in ScienceDaily, Graham Westbrook Professor of Geophysics at the University of Birmingham, warns: „If this process becomes widespread along Arctic continental margins, tens of megatonnes of methane per year – equivalent to 5-10% of the total amount released globally by natural sources, could be released into the ocean.“