If you need another reason to act – think coral reefs 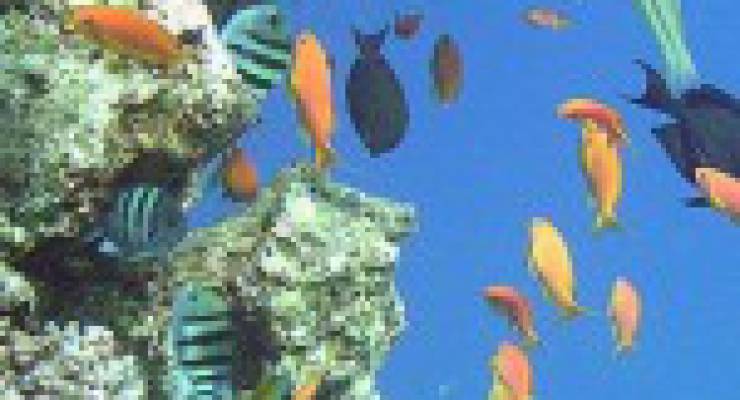 Coral reefs, one of the most diverse ecosystems of our planet, and essential to the survival of millions of people, could soon be at the brink of extinction, warn experts at a recent meeting.

Corals are an accumulation of stationary animals, called polyps, that deposit calcium carbontae into large structures that form coral reefs. Polyps live in close symbiosis with tiny photosynthetic organisms, the zooxanthellae, from whom they receive nutrients and oxygen. This symbiosis accomplishes a miracle in the nutrient- and generally species-poor tropical waters – an immense biodiversity; some 25-33 percent of the ocean’s species are believed to be dependent on coral reefs. That is why coral reefs belong to the hotspots of marine biodiversity (Science 2002).

All this is in grave danger of collapse.

„…The belief among scientists is that the window of opportunity to take action is narrow.
There is little time left in which we can still act to prevent irreversible, catastrophic changes
to marine ecosystems as we see them today. „
International Program on the State of the Ocean (IPSO)

For years we have known that the future of coral reefs (as for most other parts of the world’s oceans) is threatened by increased temperatures and increased acidification (WBGU 2006). Polyps expel their symbionts when conditions get stressful, or the symbionts die, causing coral bleaching. The resultant lack of nutrient recycling causes large-scale die-offs that can ultimately cause an entire reef ecosystem to collapse.

At a meeting by leading scientists organized by the International Programme on the State of the Ocean (IPSO) and the Royal Society, it became clear just how fast and inevitable these processes will proceed if we do not manage to avoid further increases in CO2 emissions. In fact, coral reefs are now regarded by many scientists to be the most vulnerable ecosystem to climate change.

„At anticipated rates of emission increase, it is expected that 450 ppm CO2 will be reached before 2050. At that point, corals may be on a path to extinction within a matter of decades. By 2050, the remaining coral reefs could fall victim to ocean acidification. Such a catastrophe would not be confined to reefs, but could start of a domino-like sequence of the fall of other marine ecosystems.“ (ScienceDaily).

It seems that the reasons to act are more than enough (also see here and here); to act today, not tomorrow. Talk to your local, regional, and national politicians, switch to renewable energies, and reconsider and rearrange your own life style (and don’t just tell others to do so). If we all would be doing our part, we could avoid a loss that no good will nor money nor elaborate words will bring back.