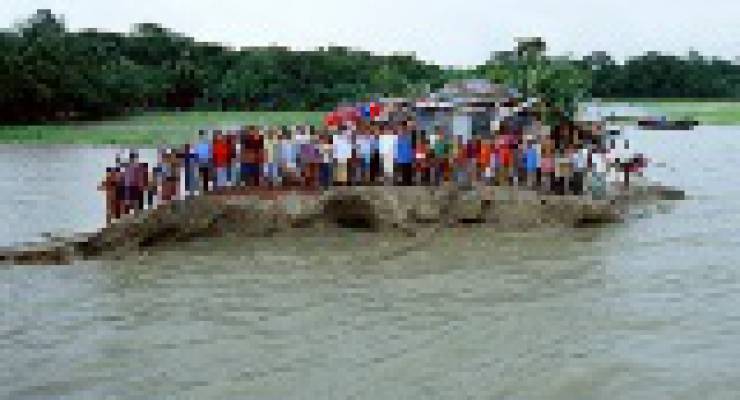 Gary Braasch’s book „Earth under Fire“ visualizes impressively the urgency of effective action, i.e. for the need of renewable energies and increased energy efficiencies. A book that should be translated into every language!

An Interview with Zinta Lundborg, re-posted from http://www.bloomberg.com

In one photo, flood-plagued Bangladeshis crowd onto a speck of road surrounded by rising water. Another image gives an aerial view of Florida’s Delray Beach, where luxury high-rise buildings cluster on a thin strip of eroding sand.
Gary Braasch, an award-winning environmental photojournalist, captured those shots and their embedded warning of global catastrophe. His book “Earth Under Fire: How Global Warming Is Changing the World” combines field experience, scientific reporting and stunning pictures of what’s already happening as the planet warms. An updated version of the 2007 edition has been issued by the University of California Press.

President Barack Obama has appointed a strong team of scientists and others who understand the issue, headed by Secretary of Energy Steven Chu, a Nobel Prize-winning physicist. The U.S. may take the lead on global warming at the United Nations Climate Change Conference in Copenhagen in December. For Braasch, it’s simple: Pay now, or pay a much higher price later. We spoke at Bloomberg’s headquarters in New York.

Lundborg: In the two years since the book came out, have you become more optimistic or more pessimistic?
Braasch: I’m more pessimistic. One of the most troubling things is that we haven’t slowed down the amount of carbon being put in the atmosphere at all. Last year we emitted more carbon by actual volume and by parts per million than we ever have
before. Plus scientists say now the dangerous effects will be felt sooner. [[NOTE: “Last year” means 2007, per the Global Carbon Project. 2008 numbers are not in yet and could be somewhat smaller due to the price of oil and oncoming financial crisis.]]

Lundborg: Isn’t a lot of the damage already locked in?
Braasch: If we could stop right now, and have no more carbon emissions, we’ll still see warming of 3.8 degrees Fahrenheit. But if we stay on the present course, it could be as much as 10 degrees Fahrenheit warmer this century. Some scientists say it could be even higher. [[NOTE: 3.8 F is high for most “if we stopped completely” estimates of under 2 F. My error. However, it’s just theoretical since we are not stopping, and ranges of possible temperatures by 2100 now range to 15 F]]

Lundborg: What happens at 10 degrees?
Braasch: Nobody knows, but there are good guesses. Sea- level rise would accelerate, and huge amounts of low-lying coast would be awash. We’re talking about Battery Park (New York) and Miami Beach. Farming areas of the Southwest will be no longer arable owing to deepening drought. There will be disruptions in the weather system, so incredible flooding will alternate with incredible drought in places like Africa.

Lundborg: Water seems to be a major problem — too little or too much.
Braasch: The water we have to be really concerned about is drinking and irrigation water. Much of that water depends on glaciers that are melting away.

Lundborg: There have been many human migrations on our planet — maybe people will move to resource-rich Canada and Siberia, when warming makes them more habitable?
Braasch: There are many implications to this, some of them political. Clearly something will have to be done with all the displaced people. Many countries won’t want them. We’re all going to have to cooperate, or there will be big conflicts,
specifically over the water that’s left.

Lundborg: Scientists say more than half of the creatures living on Earth are already changing. What are some examples?
Braasch: There’s the polar bear, of course, whose habitat is melting. Bird-migration patterns are changing, as are insect ranges. Spring is coming earlier. Warmer winters let pests survive better in forested areas, like the bark beetles and wood borers, and after a few years the trees are overwhelmed by an out-of-control native insect. That means more devastating wild fires. It’s all connected.

Lundborg: What should people be doing now?
Braasch: Every building should be covered in solar panels and have a wind turbine on the roof. Every vehicle should run on electric power from solar and wind. Mass transit should be fun and free. We should get rid of coal. All coastal areas should be moving schools, hospitals, fire departments, stores and other buildings to higher ground. Every product should say right on it how much carbon dioxide was created in its manufacture, and that amount should be taxed — the lower the amount, the lower the tax. If all Americans just changed the light bulbs in their houses to the compact fluorescent variety, it would be the equivalent of shutting down 12 coal-fired power plants.

Lundborg: Where would you place your bet on the high-tech solutions?
Braasch: A self-contained, hydrogen-creating fuel cell has a lot of promise. [[NOTE: This refers to recent discoveries by Dan Nocera and others which promise low-energy production of Hydrogen that may allow fuel cell base load power and self contained units, but much study, demonstration and development remain in the future.}}

Lundborg: What’s the bottom line on climate change?
Braasch: As I say in my book, “No policy should be promulgated, no program initiated, no alliance sealed, no purchase made, no machine designed or built, no land use permitted, no product introduced, no law passed, no politician elected unless the action is a step forward to reduction and reversal of the effects of greenhouse gases.”