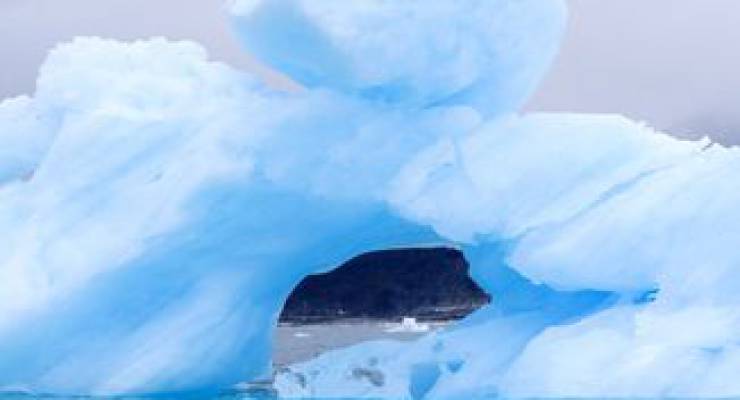 Dutch sculptor Ap Verheggen has launched a series of four art projects in areas undergoing tremendous climate change. For the first, he designed one giant sculpture that has been placed on an iceberg on the west coast of Greenland. The artwork can be viewed ‘live’ via camera connection until the iceberg melts and the sculpture disappears into the sea. In theory, its journey could last for two years, ending on the east coast of the American continent.

With this project, Verheggen is looking to draw attention to the visible impact of climate change, and especially its effect on local Inuit culture. “Climate change brings about culture change” says Verheggen, whose goal is to show how local communities in the polar region are forced to change their practices at unnatural speed.

The Greenland village of Uummannaq – where the sculpture was erected – is located on an island in the middle of a fjord, and is home to 1.000 people and no less than 2.000 sled dogs. For the first time this winter, ice did not form around the island at all. “It rained on New Year’s Eve, and in January temperatures rose to an unprecedented 52 degrees Fahrenheit” describes Ap Verheggen about his visit to Uummannaq earlier this year, while looking for a location for his sculptures.

His giant sculpture represents a dogsled driver. As Verheggen puts it: “Usually it is the driver who determines when the journey begins, where it goes, and when it is over. By placing the dogsled driver on an iceberg, we show that nature ultimately determines the course of the journey.” When the sculptures – made of pure iron – will eventually collapse into the depths of the ocean, there will be no damage to the ecosystem because dissolved iron is a natural part of it. Nevertheless, Verheggen has devised a rescue plan enabling him to recover the sculpture, if nature allows it. In any case, the webcam and batteries attached to a buoy will definitely be recovered. In principle, the sculpture was erected on 17 March 2010, at the location selected earlier this year. Verheggen is hoping that unpredictable climate will freeze the sea surrounding Uummannaq, otherwise he will have to search for ice in other locations deeper within the fjord. It remains unclear when the iceberg will detach from the sea ice, as well as the exact course of its route, which will be determined by weather and currents. In theory, the iceberg could float to Canada, ending up along the east coast of the United States before it melts.

The next set of sculptures in this series will be placed in other locations within northern Canada, as well as on melting permafrost in Siberia. The World Wildlife Fund (WWF) has pledged its supports to this project, as it draws attention to global warming and its effects on man and nature in a unique way.