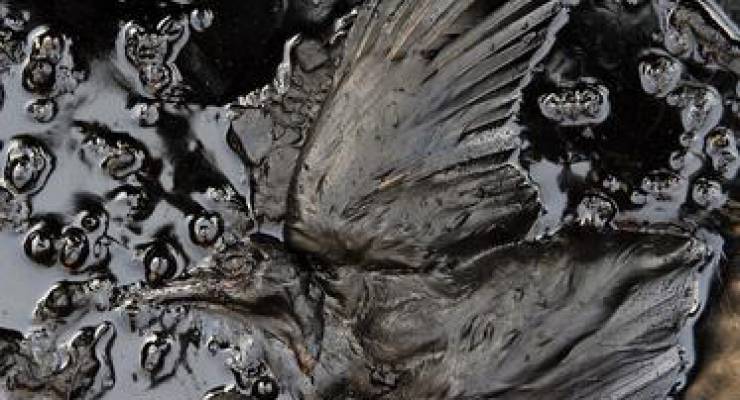 The horror emerging from the depths of the Gulf of Mexico continues to lay its nightmare before a nation – and a world – of stunned witnesses. With the tragedy of native waterfowl now being found smothered in petroleum along the marshes of Louisiana comes continued reports that the American people have been prevented by BP officials from seeing images of the slaughter. According to reports by photojournalists, television producers and others at the scene, both BP and Coast Guard officials in control have restricted access to oil stained-beaches, have rejected news organization requests for flyovers and have, in several cases, prohibited the taking of pictures of oil-coated wildlife.

Coast Guard spokesmen have defended flight restrictions as a necessary safety precaution. However, incidents of news control have been reported on the ground as oil began reaching shore. Last week, a CBS News crew was reportedly threatened with arrest when trying to film oil-covered beaches in areas impacted by the disaster.

Rob Wyman, Lieutenant Commander with the U.S. Coast Guard addressed the issue saying: “Neither BP nor the U.S. Coast Guard, who are responding to the spill, have any rules in place that would prohibit media access to impacted areas and we were disappointed to hear of this incident. The only time anyone would be asked to move from an area would be if there were safety concerns, or they were interfering with response operations…”

Though public safety can be a legitimate issue, especially considering the toxic nature of the oil and dispersants used to fight the spill, the American public must remain vigilant and be ready to express their outrage if officials continue to arrogate to themselves the right to control the press. It must be remembered that in nearly every turn of this sordid affair, BP had to be coerced into providing correct information – such as the estimates of the amount of oil being spilled, a critical data set that would impact their degree of liability. It was only through the persistent demands of Rep. Edward Markey (D-Mass.) that the public was allowed to see live images from the video cameras that are trained on the leaking pipe around the clock.

The images that have made it through in the last few days are nothing short of devastating. Now, as the black tide begins to turn toward the coast of Florida, perhaps the world will look at the pictures and will, at long last, truly speak the words: it’s time to end our dependence on fossil fuels.